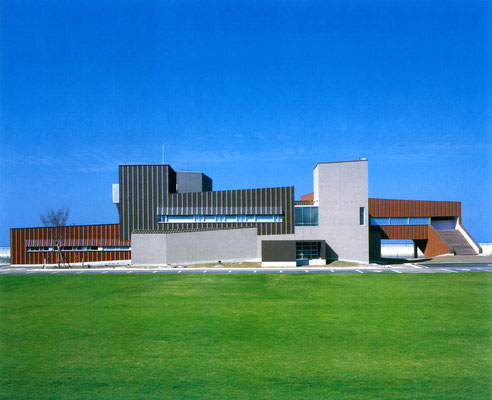 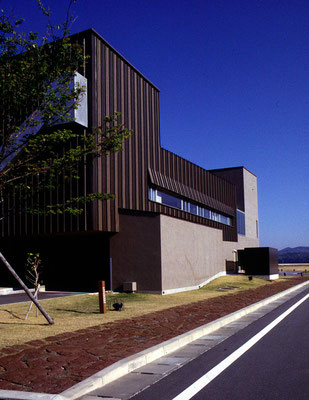 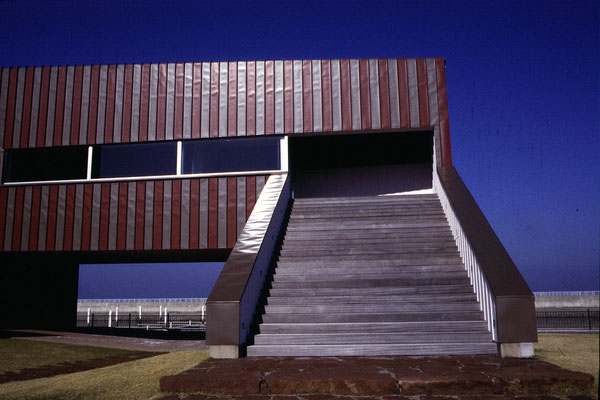 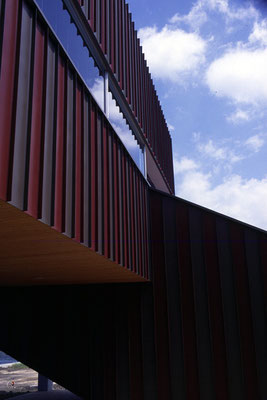 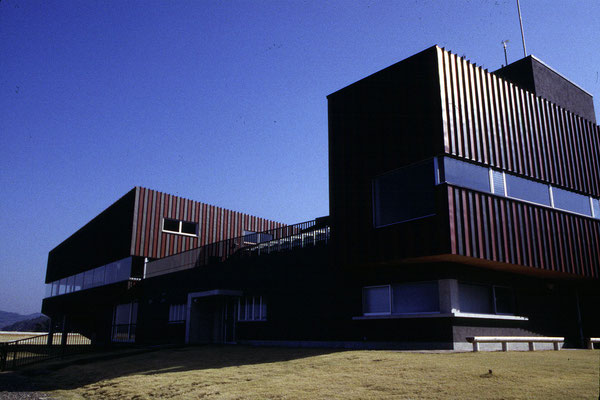 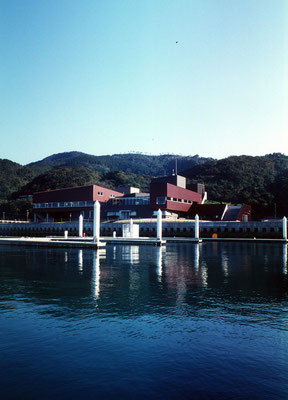 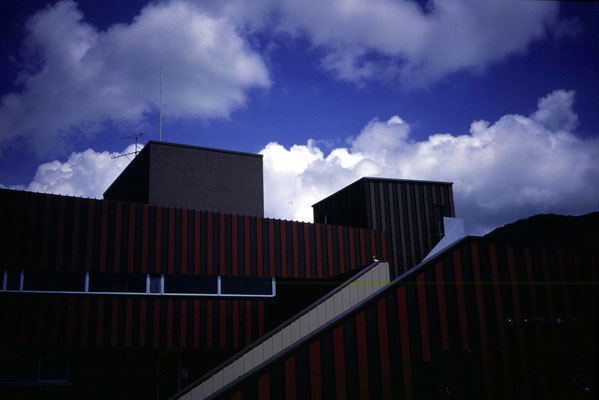 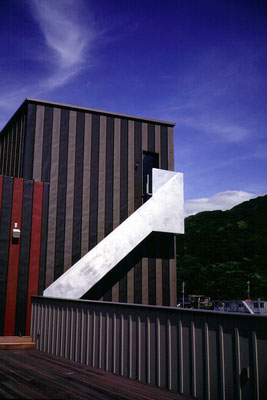 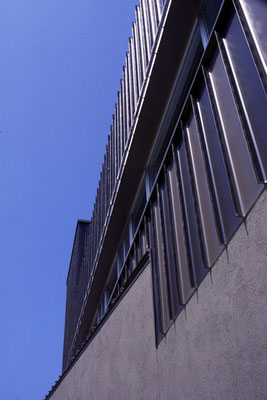 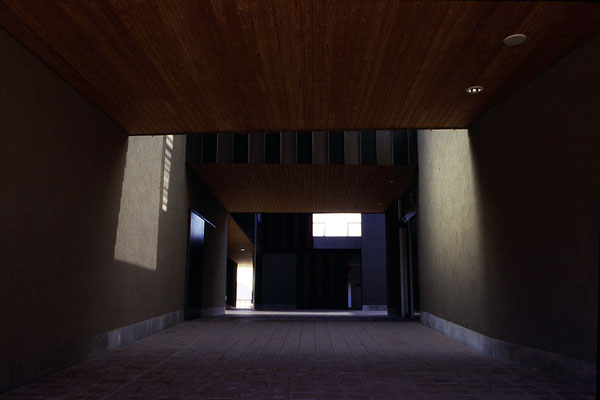 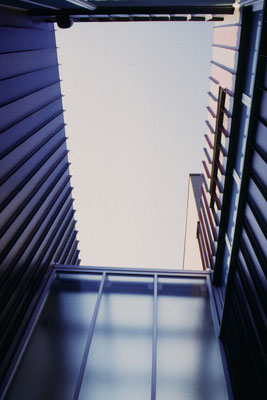 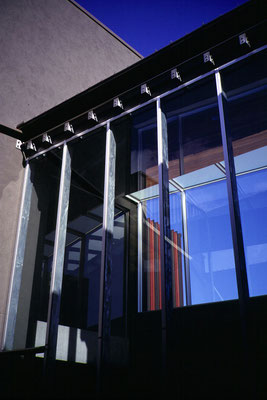 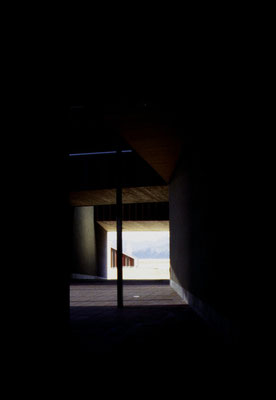 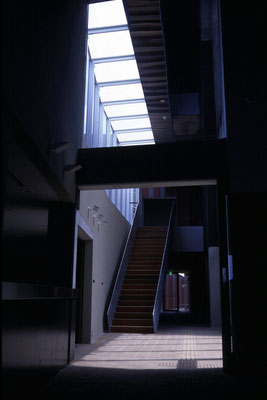 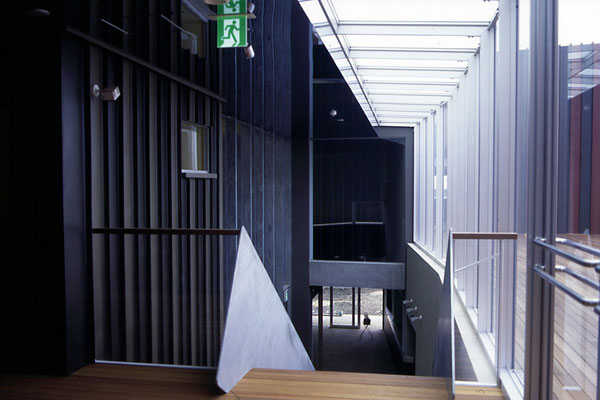 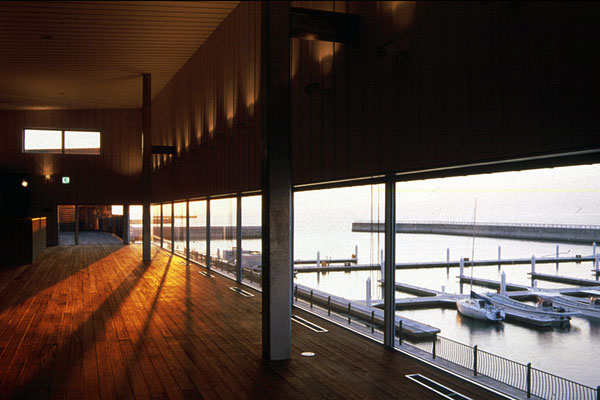 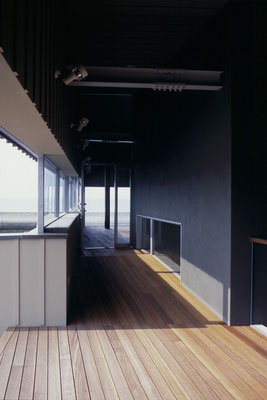 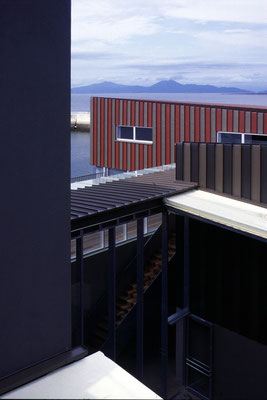 Uto Marina house is an administration facility for a yacht harbor for the Kumamoto National Athletic Meet (1999) and one of the undertaking plans involved in the Kumamoto Artpolis projects. As the project began, we faced the restrictions with the land use against reclamation work. However, we, with the marina consultants made a suggestion to propose the whole surrounding area as a Marina Park. Therefore, the marina needed reexamination in means of public use, and required reconsideration with the waterfront development from an urban designing perspective.

For the master plan, we rejected the functional zoning, placed the facility along the sea and the parking area in a loop form. This gives high accessibility leading to various parks, which make an open administration possible for the public. Consequently, a gathering free space of green gives prospect for the park users to connect marina with their daily life.

Uto Marina house is a rare example of combined complex facility containing functions for the marina administration management; a restaurant and a seminar space dedicated to marina visitors. We aimed an architectural plan by organizing the necessary functions for a marina house from such attaching facility programs as a boat-house for storing dinghies and a repair-house for repairing boats. We gave a result by efficiently placing the various functions in "dwelling-like,"" city-like" image for those visiting the park and the daily marina users.

The marina house, placed overlooking the dock system is prospected to elaborate into further future development. It is designed with the conception of the assemblage of several architectures and not by a continuous-mass to produce a structure for an attractive waterfront city. Therefore, we proceeded a "city-like" group-form and experimented to see whether the "continuum method" (a design method we have been working on for the past several years) could also be applied within complexes, concretely by making a basic minimum model and creating residual spaces (voids) through process of deformation.

First, we arranged the zoning from the given functions and made a zoning model satisfying the necessary volume. Prepared a collection of minimum model, then separated the parts to maintain persons' movements in an image of a crevasse. Resulting in forming small individual architectures (by means of administration needs, general plan and architectural form) and deforming them into vertical and horizontal way by the "continuum method." As a plane, we have cut the surface areas using diagonal lines from the cubic mass and shifted the figures creating persons' movements through functional contents.

Besides, the architecture itself has little common spaces in which each independent space, having its own sequences does not widespread into correspondence to the others when overlooking into a long perspective view, but it treats the interior and the exterior reversal making the inside and the outside seamless. Moreover, the dispersed boat-house and repair-house around the boatyard are reduced into as geometrical shape as possible and were given the same textures to resist from being isolated. In all, we designed the whole surrounding area to render (both visually and architecturally) a general continuous-scape idea as a Marina Park.

award :JIA award for the best young architect of 1999 / architecture of the year 1999

The 80s postmodern movement had left us a questionnaire on architectural forms. As a result, this led to the next step in quest of extreme lightness, which informed us of modeling. This is clearly an important element in designing and the conscious is facing towards the ethereal style. However, this intention contradicts the work of a designer, whose work is to treat forms. Therefore, many architects had been approaching in various ways to answer this contradicting statement.

One way of approaching is by keeping transparency, and aiming towards the idea of ephemeral type architecture. This gives a temporary factor in the duration of architecture. Another is by responding to all the necessary functions, and directly applying from the emerged plans. In other words, this is a systematic way of reorganizing the designing process. Lastly, the idea of clarifying the modeling works to reduce the extent between the architects' process of studies and the final thoughts and forms.

In the past few years, we have been working on designs based on the development of this modeling method, which we call it the "Continuum method." ("Continuum" here does not mean a connection of solids but it indicates a mutual relations as in terms of mathematics and physics.) It began from my interest towards the creation of systematic spaces. For supposedly, architecture is a private representation of a designer, yet, what future could there be made from that? My attempt was to demolish the pastiche-type design.

There are two meanings in the "continuum method." One is an investigating way of composing a space using as least parameter as possible. In other words, it is an elastic like architectural model which the shape is transformed by the motion of pressing one point and moving another. Therefore, the model corresponds to the alteration of deforms and settlements of the outer primary factors and the inner requirements. The other is by resolving into a geometrical shape to lessen its signification but modeling it as a continuum to ensure "architecture" as a symbolism. This is a thought of giving an accurate description for the opposite demand of visioning and eliminating in circumstances where it is appropriate to be laid into nature or urban context. Moreover, it is an experiment to control the act of sculptural forms in an arithmetic way.

Concretely, the modeling study starts by simulating a combination of volumes through area and functional demands based on a chosen space model. Then the study of "try and error" is repeated over and over to simulate the deforms by pushing and pulling a vertex of combined boxes. To numerate the model, the numerical point is set up as so to automatically exert the next point and to decrease the necessary parameter. Currently, this continuum method is based on combinations of plane surfaces, which mean a three-fixed point would determine the others on the same level. This therefore reduces the number of points necessary to make the plane sequences.

On the whole, the aim for taking this method is not to give a specific solution in a style, but to clarify the capacity of modeling and to inquire the conception of a designer's work itself.